Watching the AFC Playoffs, and watching 3 division rivals play for a Superbowl is rough. As I watch the Broncos, Chargers, and Chiefs I realize how undermatched the Raiders really were. The Raiders offense lacked the playmakers to compete against those teams. The Chargers have Antonio Gates and Eddie Royal, The Broncos have Demarius Thomas, Wes Walker, and Knowshown Moreno, and The Chiefs have Jamaal Charles and Dwayne Bowe.
For the Raiders, recievers Denarius Moore and Rod Streater flashed potential, but they still lack the ability to consistently dominate a game. The combination of Raiders Recievers were mediocre at best. Streater caught 900 yards, Moore caught 600 despite injuries, and Holmes caught 400 towards the end of the season.

Bottom Line: Regardless of who the Raiders have at Quarterback, The Raiders need an explosive gamechanger around him. The Raiders need to adress the receiver position sometime between rounds 1-3 of the draft. Young Tighte Ends Rivera and Kasa flashed potentional, but could also benefit from an outside threat who can be relied on for big 3rd down catches. Here is my anaylsis of this draft classes’ recievers. While Sammy Watkins seems to be the conseus #1 reciever, this is still a very deep draft class of pass catchers. If they miss out on Watkins the Raiders can still get quality later in the draft.

Sammy Watkins is only 6-1. He isn’t the massive target that AJ Green or Julio Jones were. Watkins can change the game. He has the versatility to play the outside or inside position. His effortless acceleration makes crisp routes, and big plays down the field. He can take the ball anytime he touches it rather it is a return, screen, or run play. Besides his advance route tree I think Watkins possess a lot of maturity unlike Moore. I think he is the most NFL polished reciever in this draft and who ever the Raiders have at QB will be better of this guy. Even the most pessimistic Raider fan can not argue him being drafted at 5, but ideally the Raiders would love to grab him and another draft pick via trading down in the first.

Mike Evans is a monster 6-5 posession style reciever. He has the size Reggie Mckenzie likes for his west coast offense. Evans has been compared to Vincent Jackson, but he is still raw. He makes big plays, but there are stretches when he is ineffective. Whoever drafts Evans will have to allow him develop his route running skills. Some Team will probably fall in love with Evans for the middle-late first round, so it is unlikely he will be a Raider. I think the Raiders could do better adding one of the more polished receiving targets

Marques Lee was probably one of the top receiving targets in last years draft. He won the Biletnikoff award as a junior, but followed it up with a disappointing senior year. Lee has a good combination of size and speed, and showcased that with 118 yds & 2 tds in his last game as a Trojan. His production and route running should translate to the next level. The Raiders could be very happy if he is on the board when they select in the 2nd round. 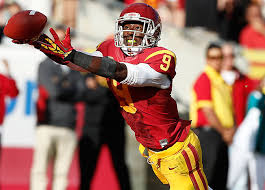 At 6’2, 211 lbs. Allen Robinson can grab balls out of the air. From Penn state, the reciever has a continuity with Matt McGloin. He had back to back 1,000 yds receiving, however, the knock on him is he doesn’t do anything spectacular and he has had some drops. The Raiders will have a tough decision between him and Lee in the 2nd, but Robinson will be considered.

128 receptions for 1,730 yards and 16 touchdowns are Cooks stats in 2013, as he was named the nations best reciever. He draws some comparisons to Tayvon Austin because he is undersized. At 5’11 186 Cooks is undersized, but he is also the biggest threat in the open field. If he falls to the 3rd round he could be an absolute steal. His speed and play-making ability could command attention from Streater, Holmes, and Moore. Cooks would add another dimension to the Raiders offense, so I could even accept the Raiders drafting him in the 2nd.

I don’t care what anyone says, there is something about catching 24 touchdown passes in a season. Davante Adams did that in 2013. Yes he did it with an NFL QB and a Down-field system. However, Adams is an explosive down-field threat. His speed and size allow him to make plays on the ball. He could go anywhere between the late first and early third round. The Raiders need someone who has a nose for the end-zone. Adams is a local head and would be the down-field threat Raiders fans would love.

Benjamin is sure to have someone fall in love with him. He is a 6’5 reciever with enough speed to get down the field. He is coming off a national championship, which is a benefit of playing with a heisman winner. He could be as low as Mike Williams or as High as Vincent Jackson. Someone may reach for him in the 1st rd, but he should probably have enough upside to be worth a 2nd rd pick.

He only played in the toughest college football conference, but Matthews might be a sleeper pick. At 6’3 he can make plays on the ball, and drops are uncommon for Matthews. He has a 2nd round grade according to CBSSPORTS.com and he could fall to the early 3rd for the Raiders.

Beckham won an award for having the most yards in all of football. He is raw, but his kick returning ability should have him climb up draft boards. At 5’11 205LBs he doesn’t have elite size, but his hands and route running ability are underrated. The Raiders desperately need a game-changer in the return game, and someone to stretch the field. Beckham could be that answer in the 3rd, as he averaged 19 yds a reception last season.

Despite shaky quarterback play he had a 78 reception season in 2013.  At 6’1 he doesn’t have great size or jump off the tape, which will probably hurt his status compared to others in the draft. He does make plays and is one of the most underrated prospects according to SI.com. He can make plays and if the Raiders should take him in the 3rd or 4th rd.

Best of the Rest:

The Result: I am old-school, I like my Raiders recievers fast and able to stretch the field. I can live with adding a dynamic play maker at #5 by drafting Watkins. However, if they select a defensive player with #5 then there are plenty of options in the 2nd round. Lee and Robinson are probably the best players available if they are available at the top of the second. I like Lee despite the track record of USC receivers, he has enough production and upside to be the raiders #1. Cooks or Adams could also be considered at the top of the second round because of their dynamic play-making ability. I like the dimensions either of those guys add as a compliment to the Raiders Receivers Corps. If the Raiders do decide to hold out until the 3rd round than Cooks or Adams should be the no brainer pick if either are available. Outside of that, Beckham could also be a great value selection in the 3rd round because of his special teams ability. Some of the other receivers are bound to fall and the Raiders have other needs, hence they may just wait until the 3rd round and select the best available. My Personal favorite is Adams. Adams is a local out of Fresno State, and you can not teach 24 tds. I don’t care what anyone says, the Raiders need someone who has a nose for the endzone. He might be raw, but I wouldn’t mind the Raiders selecting a defensive player #5 and getting Adams in the 2nd rd.